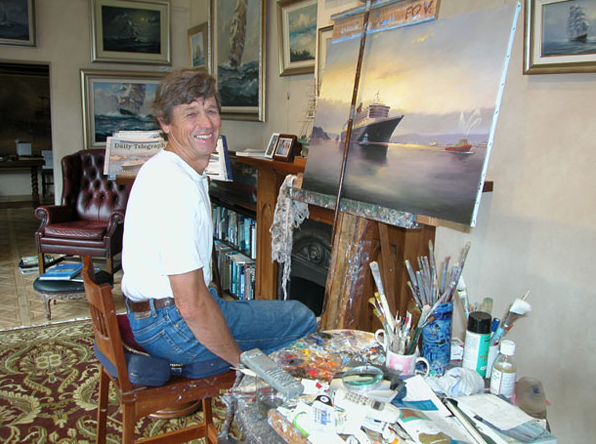 Born in Bordertown SA 1948, Ian’s childhood years were spent on the foreshore of Hervey Bay. It was here that his deep love of ships and the sea developed. By the age of 8 he was actively painting with water colours moving to oils when he was 11. His first oil survived and hangs in his Hunters Hill studio.

Joining the Royal Australian Navy at 15 as an apprentice shipwright, he served 12 years reaching the rank of Chief Petty Officer. He saw active service in Vietnam 1967-68. Ian painted continually in off duty hours, recording the ships and scenes he observed during his travels. Prouds Art Gallery offered him his first one man exhibition in 1974 while he was still in the Navy, the success of this show convinced him to try becoming a full time artist once his service time expired in 1975.

After a brief stint of cruising and painting on board a 38 ft yacht, he built a studio overlooking the Whitsunday Islands, this idealic location was too far from the art world and he returned to Sydney in 1981. Married with 3 children Ian lives in Hunters Hill, Sydney, his studio the converted stables in the rear garden.

He regularly sails on his classic 45′ cutter ‘Karalee’, and crews on board the Barque ‘James Craig’ on her extended voyages. These trips reinforce Ian’s deep understanding of the sea, his illustrated log books are always viewed with great interest by visitors to his studio.

In 2000 Ian was invited by the Royal Australian Navy to go to East Timor and record the Navy’s involvement during the crisis, he spent time on several ships sketching and painting, the resulting paintings now hang in the Navy’s Fleet Headquarters. In 2002 Ian joined the Ice Ship ‘Sir Hubert Wilkins’ on a 5 week voyage to Antarctica, part of his illustrated log is reproduced on this site.

Ian works mainly on commission, he exhibits with ‘The Maritime Gallery at Mystic Seaport’. In Connecticut USA, the Gallery hosts ‘The Annual International Art Exhibition’ and since his first acceptance in 1987, Ian has won 6 major awards.

In 2002 he was appointed one of the Gallery’s ‘Premier Artists’, only 20 are appointed worldwide. Ian is a member of “Kevin Hills Top 10 Australian Artists” who exhibit their work several times each year.

In 2013, Ian was appointed as the official artist for the International Fleet Review ‘2013’ commemorating the 100th Anniversary of the Royal Australian Navy.